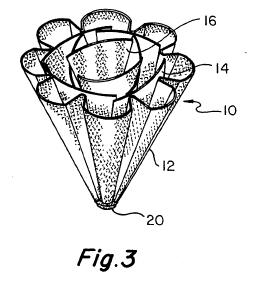 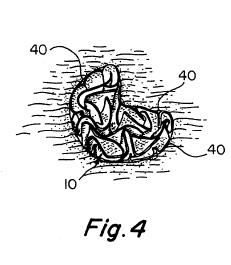 Bard owns a patent on a method of repairing hernias with a flexible mesh plug. Bard sued U.S. Surgical for infringement and for inducing surgeons to infringe. Because in the prosecution history and specification Bard defined the claimed plug as having pleats, the district court’s claim construction requiring “pre-formed pleats” was affirmed.  Noninfringement affirmed.

In this case, the inventors clearly and deliberately disclaimed any coverage of non-pleated plugs they might otherwise have had when they stated during reexamination that “the surface of the inventive plug is pleated” in an attempt to overcome the prior art-based rejections of claims 19 and 20. Under the theory that the inventors acted as lexicographers, the majority holds that this statement, among others, shows that the inventors “clearly defined the plug of claim 20 as having pleats.”  The statement, in my view, is a surrender of claim scope, which precludes Bard from recapturing coverage of non-pleated plugs. Litton Sys., Inc. v. Honeywell, Inc., 140 F.3d 1449, 1458 (Fed. Cir. 1998). Because the inventors clearly disclaimed coverage of non-pleated plugs in the reexamination, I believe we may affirm the judgment of the district court on that basis alone; accordingly, I find it unnecessary to reach the remaining grounds for affirmance relied upon by the majority.