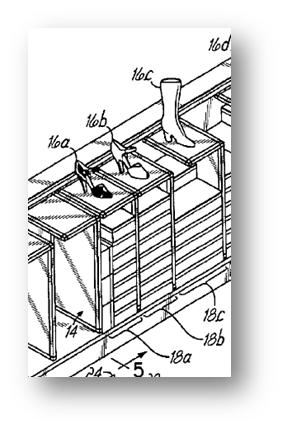 DSW holds a utility patent and a design patent on a shoe display system. In 2006, DSW notified off-brand competitor Shoe Pavilion that its displays were infringing. Wanting to avoid trouble, Shoe Pavilion took immediate action and removed the infringing displays. (Although immediately begun, the whole take-down process took seven months.) DSW was not satisfied that the replacement design avoided infringement and subsequently sued.

Damages and Notice: The case raises several issues, but here I will focus on damages. On summary judgment, the district court held that Shoe Pavilion owed no damages for infringement by the initial design because the defendant took immediate action to stop infringing. On appeal, the CAFC vacated that opinion.

The Patent Marking Statute limits damages that may be recovered by a patentee.

The Pre-1952 Patent Statute included a similar restriction on damages. That statute was interpreted by the Supreme Court in Wine Railway (1936). There, the court held that the recovery by patentee who failed to mark products covered by the patent would be limited to damages incurred after actual notice was provided to the infringer.

The policy behind this approach is to give some level of protection to innocent infringers. However, damages begin to accrue as soon as notice is given. Thus, in this case, Shoe Pavilion is liable for the damages that occurred during the seven-month take down process.