A better calendar — If you are interested in Academic Intellectual Property Conferences, Mike Madison hosts the master calendar here: http://madisonian.net/conferences/ 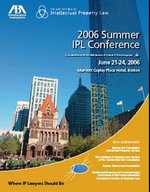 I will be at the ABA Summer IPL Conference on Wednesday and Thursday.  John Welch along with the ABA Staff have put together a “Bloggers’ Corner” at the “get acquainted” reception on Wednesday, June 21st, from 6:00 to 7:00 P.M. The cage-match will start at 6:30 — Battle-of-the-Blogs. Come see:

For a brief description of the bloggers, read this flier. John Welch has put together a set of photos that vaguely represent the bloggers (although Dannenberg may actually be only an avatar).

Barkoff (Orange Book Blog) can’t make it
American Conference Institute has put together a number of upcoming patent related conferences that look excellent.  One of our partners recently attended the FDA bootcamp in NYC and had a great time. I’ve listed a couple of the programs, but there are many others:

Other Upcoming Events: I will be at the ABA’s Intellectual Property Law Summer Conference in Boston from June 21-24.  Please introduce yourself [I look like this] or contact me to set up a time to meet.  The ABA has scheduled a "meet the bloggers" event at 6:00 on Wednesday evening.  I’ll be there along with John Welch, Matt Buchanan, and others.

On June 14, 2006, you might want to take an hour break (1–2pm EDT) to take part in an audio webcast discussing: Permanent Injunctions in Patent Infringement Cases After eBay Inc. v. MercExchange L.L.C. The PLI CLE will be moderated by Professor John Duffy and will feature the two attorneys who argued the case: Carter Phillips and Seth Waxman.  Professor Duffy is one of the few patent attorneys who was also a Supreme Court clerk (Scalia).  Topics for discussion include:

Day one of our blog law conference has been a great success.  Cathy Kirkman of Wilson Sonsini and I are co-hosts of this LSI conference that has been billed as the first CLE covering the “law of blogs.”

Chief Judge Michel of the Court of Appeals for the Federal Circuit has invited members of the bar to attend a discussion at the court on Tuesday, November 15, 2005 at 2:00 pm in Courtroom 201.

Judge Michel will discuss several topics as part of his effort to continue to build a better relationship between the bar, academics, and the Court.  Planned topics include: effective appellate advocacy, the attorney’s role as an officer of the court, and the court’s internal process.

The event will be held in the Howard T. Markey National Courts Building, 717 Madison Place, NW, Washington, D.C. There is no charge and all are welcome. Those interested in attending are requested, however, to RSVP by sending an e-mail to webmaster@cafc.uscourts.gov.

Two partners at MBHB (my firm), Jim McCarthy and Emily Miao, have put together what looks to be a great “webinar” on intellectual property due diligence to be held on Thursday, October 27, 2005 at 2:00 pm CST. Issues to be discussed:
There will be a Q&A session at the end as well.
Please contact Megan McKeon at 312.913.2105 or mckeon@mbhb.com for more information or to register. (Must register by 1:00 pm CST).

The Court of Appeals for the Federal Circuit (CAFC) has announced that it will be “Sitting in Chicago, Illinois” for the week of November 8, 2005 — providing a great opportunity for students and practitioners who rarely get to see the CAFC in action.

I was hoping to be at the 2005 IPO annual meeting in Seattle (Sept 11–13). Unfortunately, a conflict crept its way into my schedule. I will be at the 42nd Annual Corporate Patent Seminar September 19 – 20 in Chicago. (Still time to register if you do it now).  Another interesting conference will held September 16 in Las Vegas. (www.dunescle.com).

I am happy to announce that Patently-O was awarded the TechnoLawyer @ Award as the Favorite Practice Area Blog for 2005.  This award means a lot to me because it was Patently-O readers who made it happen.  I would like to personally thank everyone who took time to vote. (Drop me a line and I’ll take you out to coffee).

On Wednesday May 4, the Patent Office is holding a couple of “Customer Partnership Meetings.”  These meetings are designed to provide insight into how the patent office handles patent applications and tend to give some informal insight into peculiarities of particular technology areas. They are also free of charge.

The PTO has a newly formed Nanotechnology art class.  The Wednesday discussion will provide a look at how the new art unit is collecting and searching the prior art.  In addition, an industry panel will give feedback to the PTO and participants.  There will also be time for an open floor discussion.  Although the deadline for signing up for the conference has passed,

Because of a popular believe that business method patents are of lower quality, the PTO has instituted a number of initiatives to improve quality in the art unit.  The PTO is focusing on speeding up a process that currently involves long delays.  John Love, director of art unit handling business method patents as well as other members of the unit will be available to discuss these issues.  This conference may be full — however Joseph.Thomas@uspto.gov may be able to fit you in.

Note: I’m planning to be at the business methods conference.  I look forward to meeting you there.

The Practicing Law Institute is hosting a free audio webcast IP Career Series directed to young lawyers, law students, and people thinking about law school.  Their next audio briefing is titled “So You Want to Be a Patent Lawyer…," and will be held on April 18th from 1:00-2:00 p.m. EST.  John White (who helped me learn patent law) and Katharine Patterson will present topics that include:

In answering the general questions, White & Patterson expect to delve into how to decide between a prosecution or a litigation career and other sub-topics such as: The distinction between patent agents and patent attorneys; Hot undergraduate technical degrees; Whether and when a PhD is important; Geographical areas; and how to find a firm that wants to hire you.

In May 2005, the USPTO will host its Spring 2005 Business Methods Customer Partnership Meeting.  This forum will likely provide a valuable opportunity for patent prosecutors to learn what goes on at TC 3600 beyond the MPEP.

The director and managers of of the Business Methods workgroup will be there for an informal partnership meeting to discuss topics such as public pair, quality initiatives, the determination of statutory subject matter, and other topics specific to business methods.

Attendance reservations are taken on a first-come first-served bases.  However, the USPTO may limit the number of attendees from any single organization or law firm. Therefore, organizations and law firms should designate an official representatives. No one will be permitted to attend without an accepted attendance request.

The Patent Caucus is building steam as it crosses the United States — Headed for Washington DC and patent reform legislation.

If you have an interest in patent legislation, make sure your voice is heard now.

In a rare cooperative effort, the Federal Trade Commission (FTC), National Academies STEP Board, and the American Intellectual Property Law Association (AIPLA) are jointly hosting a series of town-hall conferences on patent reform and are discussing specific legislative proposals.  These agencies are working hard to get input from individuals and organizations interested in the patent process.  Conferences have already been held in San Jose and Chicago, with the final two stops in Boston (March 18) and Washington DC (June 9).  These town-hall meetings provide a rare opportunity to transparently assess proposed legislation and have your voice heard.  Transcripts of the meetings are being compiled and summaries will be provided to members of Congress during hearings on patent reform that are expected this year.

Legislation is being proposed in a number of areas including: (i) a statutory fair use exemption from infringement liability for experimental use of a patented invention, (ii) a change to a first-to-file system and elimination of interference proceedings and other elements of , (iii) post grant opposition proceedings, (iv) changes to the wilfulness standard, and (v) expansion of prior-user rights.

These legislative proposals are still flexible and will be altered based on feedback from the town-hall meetings.

I would like to invite you to take part in the remaining meetings.  If you cannot attend, feel free to contact me (crouch@mbhb.com) or William Rooklidge to present your proposal or other thoughts.

Jon Dudas, PTO Director, gave a great luncheon talk at the well attended Town Hall Meeting on Patent Reform held in Chicago.  In his speech, he gave a commitment to work toward patent reform measures in Congress.  Dudas has worked on Capitol Hill for many years and has strong relationships with key Republican members of Congress.  His active support will be critical for any patent legislation.

The big news, however, were his clear statements on non-legislative steps the PTO is undertaking to solve a number of well known problems at the Office.  Specifically, Undersecretary Dudas spoke on (i) transparency; (ii) reexaminations; and (iii) appeals.  The best aspect of the ideas that Dudas presented is that the solutions can be implemented by the PTO without Congressional action.

(i) Transparency: Dudas is a big believer in the motto: “You cannot improve what you cannot measure.”  With that in mind, he is implementing a number of new systems for measuring how well the PTO is doing in terms of both pendency and quality.  These include more in-process reviews as well as a reformation of the pendency statistic.

Historically, pendency has been calculated by looking at newly issued patents to determine how long they took to issue.  This calculation is obviously backward looking.  Now, the PTO is implementing forward looking measures to determine the ‘firepower’ of various technology areas.  Specifically, the PTO’s firepower number is an estimate of, given the current backlog and workforce, how long would it take for a patent filed today to issue or be abandoned.  This number will be more difficult to calculate, but is necessary if the pendency number is to serve as any basis for improvement at the PTO.

(ii) Reexamination: At the conference, there is quite a bit of discussion on legislative efforts to enact a post-grant reform system through legislation.  However, Dudas believes that the reexamination procedures currently available provide a valuable means for improving patent quality of the most important patents (those being litigated).  The problem is that the PTO is much too slow in evaluating reexams.  Almost half of reexams take over two years and many over four years to complete.  In his talk, Dudas gave a commitment to cut pendency of all reexams to two years or less.  To ensure quality, Dudas plans to implement a supervisory review process of for all reexams.

(iii) Pre-Brief Appeal Conference: Finally, in an announcement that may save at least $30M in annual attorney fees, Undersecretary Dudas indicated his plans to introduced an opportunity for a pre-brief appeal conference to give the applicant an opportunity to discuss perceived errors by the Examiner in conference with the Examiner and at least one supervisor or SPE.  The thought is that this conference may eliminate a good portion of easy cases that are normally decided only after the applicant files a (costly) brief.

I was able to talk with a number of great attorneys at the meeting, including Undersecretary Dudas, Greg Mayer, Matt Buchanan, Bill Rooklidge, and Herb Wamsley.